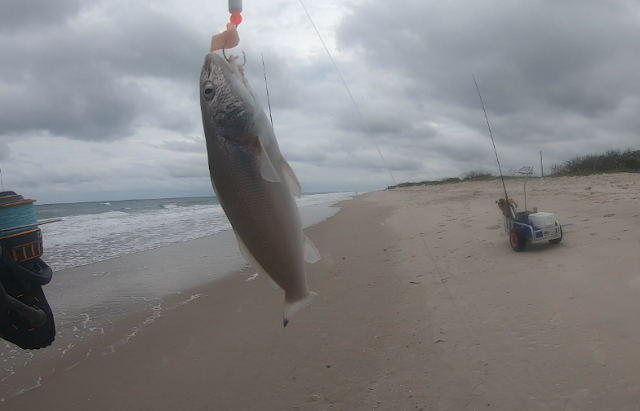 🎣 Sebastian Inlet District Week of June 22 🐟 Fishing Action About the Same, Weather Turned for the Better "We have been getting some mixed reports with better action offshore/inshore but fishing has been decent on the North Jetty, and other areas in and around the inlet.  Anglers have been seeing some Mangrove Snapper, Red Drum, Bluefish and Spanish Mackerel. Live shrimp seem to be the favorite bait for targeting Mangrove Snapper.  Red Drum will hit on those too off the North Jetty, and don’t forget the catwalks and T-dock, particularly during the tide change.  Spanish Mackerel and Bluefish both hit on cut bait, and use your silver spoons for Bluefish and Gotcha lures for Spanish Mackerel."

🎣 Discussion post from Florida East Coast Surf Fishing YouTube 🎣 "Have not had time to go Surf Fishing since the shutdown 🐟 Work and life have been in the way. Hoping to wet the line as soon, missing my downtime." Work and life have changed for many since this shut down craziness. Work and life for us has gotten busier, others had the rug pulled out from under them. We are praying for everyone dealing with consequences of these events. For as many as there are individuals, there are that many changes. Find strength in prayer. God Bless America!
Update on Canaveral National Seashore: Canaveral National Seashore is Open Daily 12 PM - 8 PM (for those who fish the sunrise, no good)

🎣 White's Tackle Fishing Report 6-24-2020 🐟 Stuart Florida "Summer is here in full force, with heat index numbers over 100 degrees in the afternoons, so be safe out there and drink plenty of water. The beaches have been the bright spot of late, with plenty of glass minnows showing up, and Spanish Mackerel, Snook, Jack Crevalle, and some Tarpon have been around with them. Hogy Paddle Tails and other swimbaits have been most effective. but spoons and plugs have also been good. Much of the action has been south of Fort Pierce Inlet. Offshore has been pretty quiet, with some smaller Kingfish in the 70-80 foot range being the only bright spot. Seatrout have been active early, including on topwater plugs, but the heat thru the day has made most other things hit and miss. Good luck out there!" 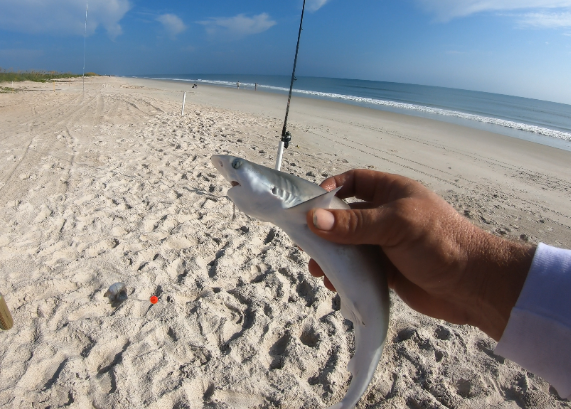 🎣 Jacksonville Fishing Report 🐟 Kingfish bite remains strong  "When it gets hot in Mayport, it’s hard not to catch fish. There’s just no guarantee you’ll catch anything worth the trouble of cleaning. Sharks, tarpon, ladyfish and big jacks are in the river and inlet, giving anglers the chance to catch world-class caliber game fish without straying far from the boat ramp. The kingfish bite remains strong ahead of this weekend’s Kingbuster tournament, although the pogie pods vanished."

🎣 Daytona Beach Fishing Report 🐟 Catch heats up under the summer sun "The area has gone into summer fishing mode. Anglers are fishing early in the morning or at night to escape the heat. SURF, PIERS: Gene Lytwyn at The Fishin’ Hole said his customers report whiting in the surf. Roy Mattson (royssurffishing.com) goes fishing everywhere from Jacksonville to Melbourne. He said the big catch from the piers and along the beach includes black drum, pompano and redfish. Capt. Mike Vickers Jr. (hammockbaitandtackle.com) said the waters along the Flagler coast are holding whiting, flounder, plus a few pompano and sharks"

🎣 St Augustine Fishing Report 🐟 FISHING REPORT | Kingfish thick on local bottom "The offshore trolling has pretty much come to an end for mahi and wahoo. The easy way to remember this is that Father’s Day is usually the last of the striking fish for a while - other than big barracuda and some kingfish. The local reefs and wrecks are covered in king mackerel. Most of the fish are in the 15 pound range, though some 20-plus pounders are being caught. The bonito are a little bit of a distraction,but the scourge of sharks has yet to show up. Last summer you could count on sharks eating more hooked kingfish than the anglers chasing them. Pogies have been tough to find either north or south of the inlet here. There’s bait on the local reefs and wrecks for sabiki rigs. The tarpon are showing up around and inside the inlets. They are also behind the shrimp boats dumping bycatch after a drag. There were a couple of hookups reported off Matanzas Inlet Thursday. Surf fishing continues to be slow. There are a few undersized pompano being caught. They prefer water in the high 60s and surf temperatures are in the low 80s now. Whiting continue to be tough to target. And if you do find them, many are small, fewer are decent and fewer still are what we’d call bull whiting. I don’t know where they’ve all gone over the past few years, but the fishery is ailing for sure." 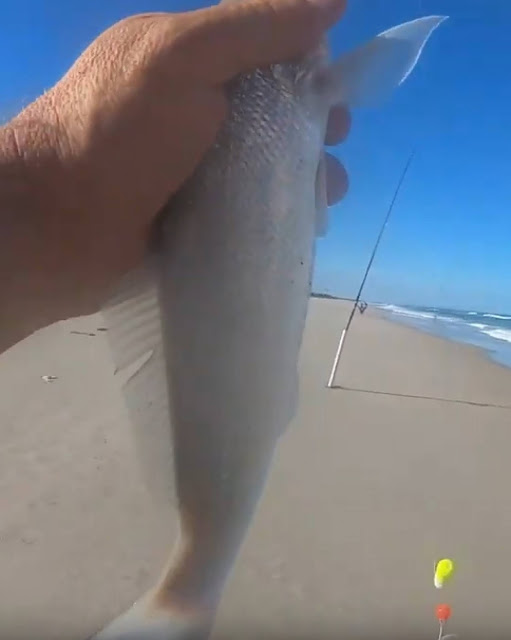 🎣 Ed Killer TCPalm Fishing Report 🐟 As glass minnows move along, look for tarpon, kingfish and sailfish to be near other bait "It's summertime on the Treasure Coast and the fishing patterns are pretty much in line with the weather patterns. On any given day, there can be plenty of fun and on given day there can plenty of lightning. So be careful and watch those afternoon storms. Offshore, anglers may find dolphin scarce, but a few will be caught. Snapper fishing will be pretty good providing a coldwater upwelling does not begin. Kingfish are in 25-100 feet of water around small reefs where there are schools of bait holding. On the beach, snook, croaker and whiting will be caught. Remember, snook are catch and release until Sept. 1"

🎣 Juno Bait Fishing Report 🐟 Weekend Fishing Outlook (6/26-6/28/2020) "SURF/PIER The glass minnow schools remain scattered up and down the beach, and the fish aren't far behind.  Snook, tarpon, jacks, blue runners, and others are all taking advantage of the easy meals.  Small flashy jigs, spoons, swimbaits, and small swimming plugs are all a good way to go around the minnow schools.  The Juno Beach Pier continues to produce good catch and release snook action, as does Jupiter Inlet.  The snook are also along the beach in very good numbers right now.  Calm clear conditions provide for good chance to sight fish some big ones cruising in the first trough." 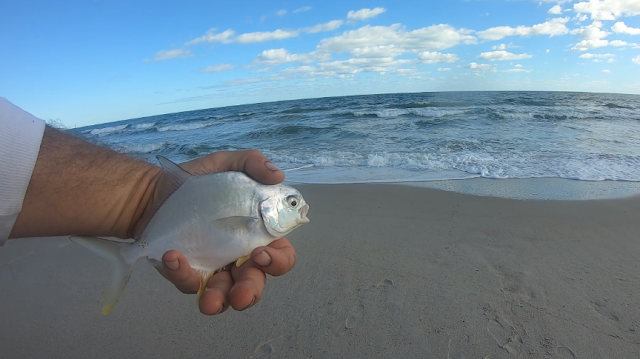 🎣 June 26 fishing report from Byron Stout 🐟 Almost breezeless days may be making it hot in the city. But the calm waters offshore have been on fire for fishermen! "LAKE OKEECHOBEE: This time of year, hordes of South Carolina anglers come to the Big O for crickets, and usually leave with plug-in freezers packed with bluegills. But Cole Hawkins showed palmetto state anglers know something about catching big bass on artificials, too. He caught a pair of 7-pounders early on a Poppin' Frog, and then switched to Senkos and swim jigs for 3- to 5-pounders that would have been good for a winter-like tournament sack of 30 pounds. He was fishing Sunday along Observation Shoal with Capt. Jose Betancourt out of Roland Martin's Marina. Roland Martin's Marine Center in Clewiston reports bass also biting well along Kissimmeegrass and reed lines around Ritta Island and on the East and West Wall areas. Topwaters early, and swimbaits including EZ Swimmers and Big EZs by Gambler, and Reaction Innovations Skinny Dippers have been hot later in Houdini, Copperfied, Lane Toad and Killer G colors. Swim jigs in bluegill patterns also have been good. Crickets, red worms, and Beetlespin lures have been good for bluegills along Observation Shoal, the West Wall, and Ritta."