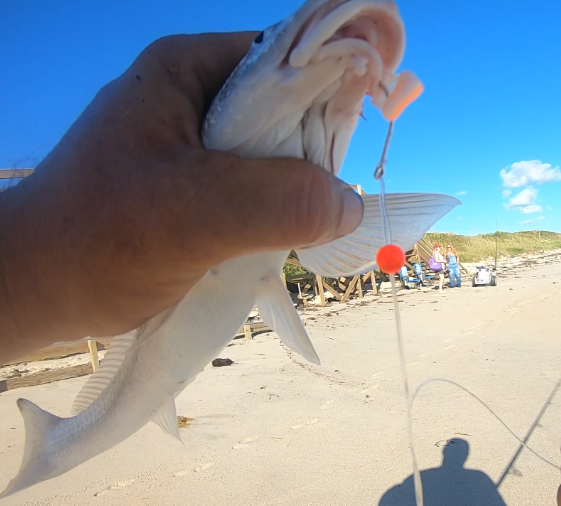 🎣 White's Tackle Fishing Report 5-18-2020 🐟 Stuart Florida "Good Morning, Offshore over the weekend not many people got out Saturday but a few fished yesterday and some nice dolphin where reported in 150 to 200ft to the south off the power plant with a scattered sail around. The bottom fishing should get good with some nice snapper around with a scattered around grouper. Its looking like the weather the next few days should be ok to get offshore for at least a half day before the storms move in. Inshore the snook bite has been good with live bait around the bridges and in the inlet with a few big guys around. The trout bite has been steady with a few big fish around to the north around Vero shore and the Moorings flats top water has produced the best around first light. The snapper fishing has been good around the bridges and on the channel edges with live white baits and shrimp."

🎣 Week of May 18 Sebastian Inlet 🐟 Snook, Reds, Bluefish and Pompano "As you head back out to Sebastian Inlet State Park to enjoy world-class fishing, we hear there has been decent action on the North Jetty.  Tommy from Sebastian Inlet Bait & Tackle tells us anglers are bringing Snook, Redfish, Bluefish and Pompano over the rails. You’ve got a few more weeks to catch Snook before the season closes for June, July and August. Get your live shrimp to target Snook and Redfish at Tommy’s and support your local small business! Best to use spoons for Bluefish and clams for targeting Pompano. Tommy said there has also been lots of smaller pan fish like Spottail Pinfish, Margates and Sheepshead hanging around.  You may want to try the South Jetty and catwalks too, and please help our friends and Rangers at Sebastian Inlet State Park by maintaining social distance and following all posted rules.  For your convenience on the North Jetty, distances of 6 feet have been marked off."

🎣 White's Tackle Fishing Report 5-20-2020 🐟 Stuart Florida "Good morning all. With a long weekend ahead, hope everyone gets a chance to hit the water. Snook fishing in the inlets has been good, particularly on live bait, with Sebastian getting the nod as top producer of late. Surf fishing has produced plenty of Spanish Mackerel on small spoons, flies, and jigs, and some decent Snook catches as well on soft plastics, but few Pompano. Nearshore there have been schools of big Jack Crevalle and a few Tarpon to stretch your string, as well as Spanish Mackerel. Offshore, the Mangrove Snapper bite has been quite good in 60 to 80 feet of water, and Dolphin fishing in 180 to 200 feet of water has been hit and miss. Inshore, Snook fishing along the flats and shorelines has been quite good, with some bigger specimens falling for Pilchards. With the continued clear water conditions, sight fishing for Redfish has been steady as well. Seatrout have been active early on top water plugs, while soft plastics have been the most effective during brighter times. Good luck out there, and stay safe." 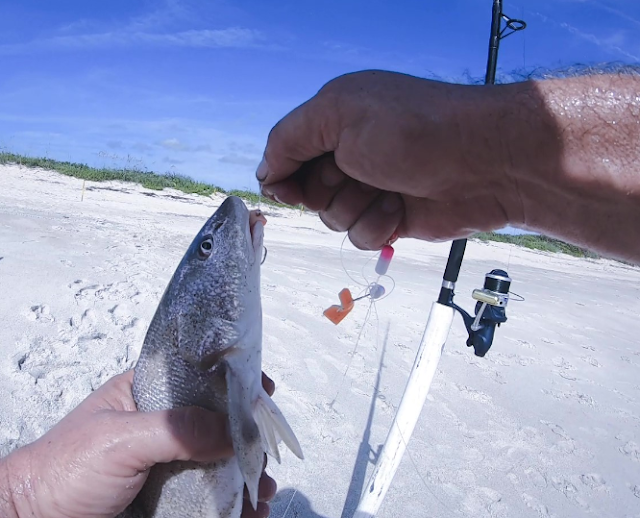 🎣 South Florida Weekly Fishing Report 🐟 May 21, 2020 "Snook and tarpon are still cruising through the troughs as well in those areas. Best bet for the snook is still to use a small croaker. Also, off of the beaches in the Jensen Beach area have been some bluefish and Spanish mackerel. Throwing a shiny spoon has been working. In the St. Lucie and Indian Rivers anglers fishing from the bridges are catching snook, some black drum, sheepshead and a few flounder on the flats off the Jensen Causeway. Most are being caught using shrimp on a jighead during the outgoing tide. Snook are also being taken during the incoming tide using live pilchards as well as a night using Flair Hawk jigs. Anglers working the inside of the Lake Worth Inlet are having a blast catching tarpon, snook and jack crevalle. All three are being caught using live pilchards on light tackle."

🎣 Fishing Report 🐟 Big bass caught in St. Johns, Tomoka rivers "SURF, PIERS: Gene Lytwyn at The Fishin’ Hole said the surf has been good to anglers in recent days. “We’ve seen surf fisherman finding pompano and whiting again,” he said. “Also some are scoring on bluefish and a few bonnethead sharks. Surf fishing should improve over the next few days as the murky water settles out to clear conditions. To the north Capt. Mike Vickers Jr. (hammockbaitandtackle.com) said Flagler surfcasters are catching redfish and black drum. “There are still reports of pompano and plenty of whiting being caught,” he added.”

🎣 ST AUGUSTINE FISHING REPORT 🐟 Flounder bulking up "Surf fishing has been real tough lately. I have never seen such a dearth of whiting. They’ve just disappeared. I don’t think there’s a huge commercial catch of them, so I’m stumped at their disappearance locally. Some point to beach renourishment as the culprit, but I doubt that. The last of the pompano are moving through on their way north. Surf temperatures are at their maximum comfort level here." 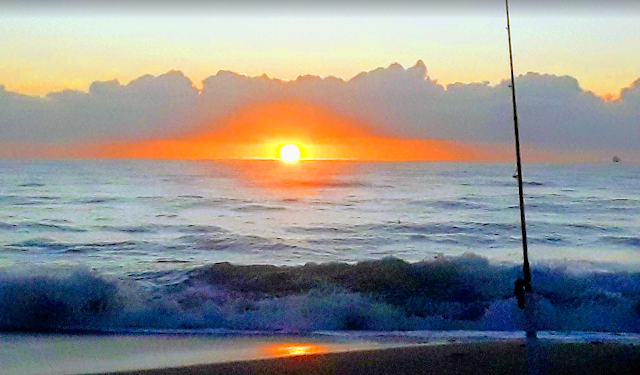 🎣 Jacksonville Fishing Report 🐟 Flounder and reds inshore; anglers eye the ocean as wind lays down  "In this week’s Jacksonville Fishing Report, we discuss the flounder and redfish bite in the St. Johns River and the possibility that the ocean could reopen in time for the long weekend to allow anglers to target kingfish, mahi and grouper. Last week’s big blow kept the fleet inshore, where the flounder and redfish reports have been a mixed bag of great and mediocre. The wind is trying to lay down in time for the long weekend, and everyone is licking their chops to get back to the ocean to catch kingfish nearshore and troll for mahi in the bluewater over the three day weekend. However, a the former Tropical Storm known as Arthur, which is traveling back south from far offshore of the Carolinas, will be pumping out ground swell, making for considerable, albeit spaced out, seas. (And some fun surf starting Thursday.) Although the beach is again navigable after last week’s weather, the pogie pods that were there before the ocean closed last week are nowhere to be found. The world is a little short on optimism these days, so I say you should make plans to brave the crowds and fish. Those with enough boat and the sea legs to handle some swell are making plans to go deep as we speak. If you want to stay close, there should be plenty of action between the jetties and backcountry. And don’t forget the surf: it hasn’t turned into a bathtub yet, which means it’s probably worth checking for whiting and pompano."

🎣 Juno Bait Memorial Day Weekend Fishing Outlook (5/22-5/24/2020) 🐟 "SURF/PIER-  Reports have been a bit slower than expected from the Juno Beach Pier and local beaches this week as anglers hit the boards and sand after a two month break. Calm clear conditions (Monday-Wed Morning) and now a building swell for a few days will further complicate getting the reports dialed in. The snook are starting to show up on the beach, and at the pier. The water temp is still a bit cool, so the snook are not fired up on the lures just yet. On the pier live baits (which have been a bit tough to come by) and dead sardines have been the ticket for the snook. Lots of glass minnows on the beach over the past few days, with a decent number of Spanish Mackerel following along with them. Tarpon have been along the beach in goods numbers as well.  The tarpon for the most part have been out of range from shore bound anglers. The Jupiter Inlet has had a few snook around, along with a good number of moonfish.  Not much to report on the pompano locally this week, but reports of fish up in Martin County and farther north continue to come in. FishBites and sand fleas remain the bait of choice for the pompano." 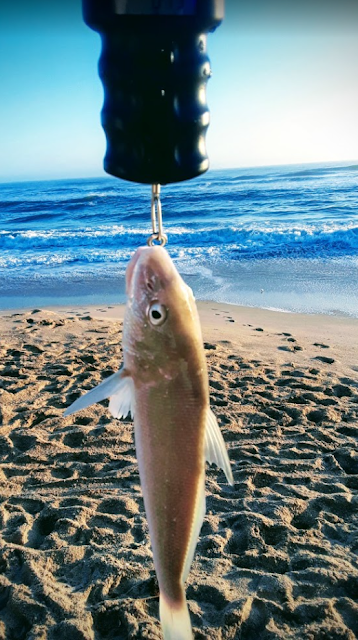